Life in the Time of Corona

All our thoughts, and lives, are currently full of Covid 19,  not to be confused with 19 large, intelligent, black birds, that's corvid 19 or a murder of crows.

I've not come to terms with the effects of the pandemic, I can't yet write about something so immediate and so close to home. Trouble is, I'm having difficulty concentrating on writing about anything else as well and there's an article I really need to get on with.

I have already begun writing about disasters. A short story about flooding in Yorkshire and the beginning of a story about the effects of climate change, also involving flooding.

I'll put the Yorkshire story here soon.
Posted by Sue at 22:33 No comments:

Street art is very transient, this vanished a couple of years ago...
Posted by Sue at 00:34 No comments:

I mean, I've had a good writing week, a good fortnight actually!  Two short stories tackled and an article for publication.

Completed the first short story which had its first/second draft last month, inspired by combining two stories on the morning's news.  The news is so often depressing, but two stories rang some creative bells for me. Terrible films  of flooded homes were immediately followed by the appearance of Alison Cronin, founder of Monkey World primate rescue in Dorset, with her appeal for people to never buy marmosets as pets. Marmosets are tiny monkeys, sentient creatures which need specialist care and should never be kept in small cages in peoples living rooms. So my story evolved, about a woman who had marmosets in her living room, and had to save them when her home was flooded.

The second story is part way through but I'm a bit stumped for now. It came from a writers' group prompt - write a story 2-3,000 words, containing at least six of the following:-

Blackpool Tower,   the Sun newspaper,  Gollum and the song,  “I dreamed a dream.”

I continued with the theme of flooding, and have managed to get in eight of the required elements, while creating an apocalyptic scenario with galloping global warming, plus two good characters. What I now need is an actual plot line for the characters to follow.  It will come.... I hope!

The article is about the Local Marine Conservation Zone. It's a fascinating subject which I really enjoyed researching. Should soon be published online and maybe in the local press. 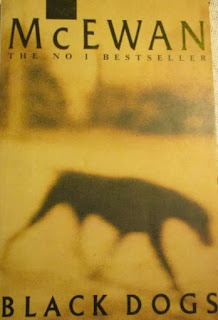 I've tried to read Black Dogs before and never got into it, this time I did. I even managed to finish it and understand why I've had difficulty before. Ok the plot line goes backwards and forewords in time, that's not the problem. The narrative skips between different characters' versions of the story but that's not the problem either.
It's a clever book, cleverly and very self-consciously written and the self-consciousness of the author is embodied in the character of Jeremy, the supposed narrator.  This is what irritates me about the story. This character seems superfluous but he forces himself into the narrative as if this is his story, it really isn't.

It's the story of June and Bernard who are Jeremy's in-laws.  We experience their story through the author, via Jeremy and I felt so distanced by this device that I really couldn't enjoy their experiences even though they are very evocative in many places.  I wanted to stay in their minds, not be constantly dragged back to Jeremy's every-day domesticities and anxieties, which I really couldn't care less about.  I suppose for someone who could empathise with Jeremy it could work, I just found him an unsympathetic character.
I do expect a lot from Ian McEwan's writing because he is so damn good. I know because he often does far better than this. Black Dogs was only his fifth book, but came after the Innocent, which is so much better.
Posted by Sue at 21:32 No comments:

Talk to the Hand: The Utter Bloody Rudeness of Everyday Life by Lynne Truss - book review

Talk to the Hand: The Utter Bloody Rudeness of Everyday Life
by
Lynne Truss


it was ok
bookshelves: non-fiction

Disappointing really, I was hoping for much more from the author of the wonderful Eats, Shoots and Leaves. It's funny in places, but much of it is just a very articulate rant.
Sorry Lynne Truss, I wanted to really like it. 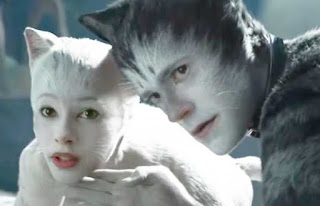 As a child I read and enjoyed TS Eliot’s poems in Old Possum’s Book of Practical Cats. I even learned to perform one for some school show or other. I have no further memory of that show but I can still recite most of Skimbleshanks, the Railway Cat to anyone who cares to listen - mostly they don't, care I mean.

"There's a whisper down the line
at eleven thirty-nine
when the night-mail is ready to depart,
saying Skimble where is Skimble
Has he gone to hunt the thimble?
we must find him or the train can't start..."

As an adult I went, twice, to see Andrew Lloyd Webber’s Cats the theatre musical, first in its early days in the West End, then when it arrived in Manchester on tour. I took various junior family members and enjoyed it both times, so did they.

Today I went with some senior – one very senior – family members to see Cats the film, sorry movie. And having read several extremely negative reviews of this by film critics, I wasn’t sure what to expect. Having seen it, my questions to those critics, who are presumably steeped in movies (but seem to know little about musical theatre), is what the hell did you expect? Haven’t you the seen the stage show? Don’t you know it’s basically a song and dance piece with humans dressed up as cats?

Ok, the CGI was a bit weird to begin with but you soon got used to it. If an almost 92-year-old (my Mum) with dementia could cope with it happily, what's wrong with you critics? I liked the expressive cat ears and tails, was less keen on the whiskers which should have been expressive but weren’t. The music was as expected, the dancing was excellent, the acting pretty good and Ian McKellan as Gus, the Theatre Cat the acting highlight.  Australian ballet dancer Steven Macrae as Skimbleshanks and Francesca Hayward as Victoria the white cat were my favourites among the dancers.

The film’s main problem was the length, it dragged in places. That’s because they’ve strived to create a much more elaborate storyline than the stage musical had. It revolves around a new character, Victoria the white cat, who is dumped in a bag, by an unseen human, in central London and adopted by the Jellicle cats. This means additional dialogue (there is very little dialogue in the original theatre script) and extra songs. It worked, kind of, but a lot of it was probably unnecessary.

However Cats the Movie is entertaining enough, a bit of comedy, good music and excellent dancing so I suggest you ignore the critics. Go to your cinema of choice, relax and enjoy the film for what it is - a musical theatre adaptation with CGI. Then you can decide for yourselves.

New Year, New Elephants - poem... because we have to be optimistic. .. or what? 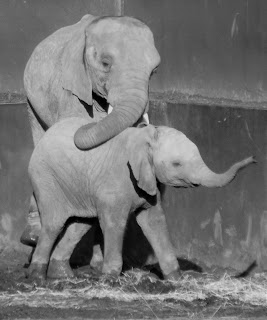 who remember no poppies, only their boon

remember a new year when they were the first beings

in their gold-red land under the clear, wide sky.

remembers every ruby-fruit and can predict

their re-birth in the joy of summer light.

over baking deserts, while calculating that

the next dune is not too high for her calf.

Lord elephant remembers his enemy who

carries boom-stick and saw to destroy

his family, fire and axe to destroy his home.

To all creatures great and human I wish

a New Year of fresh eucalyptus, poppy and cherries,

Writing is a solitary business. It is easy to put your head down and never see the light of reality. So, the intention of this blog is to put some words where a few people may actually be able to read them. 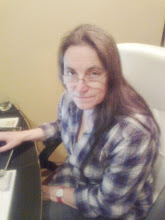